I worked on the Yourself for National Australia Bank whilst I was at Clemenger BBDO. My role was senior full stack developer. The experience was part of a campaign that aimed to get users to start talking to themselves aloud, in order to get a better understanding of what you want in life. We created a web app that processes what you say and visualises it in real-time. Below is a quick recording the of the live app:

This was one of the most technologically ambitious projects the team had ever taken on. The application was built as a single page app and micro-service architecture. The front-end was built with Vue.js, VueX for state management, and custom ES6 libraries that we created. The micro-services for facial analysis, speech recognition, image generation and more were built with Serverless framework, Node.js and AWS.

The experience can be broken down into four key areas:

The user takes a ‘selfie’ using their devices camera, we then use Amazon Recognition to perform an analysis of the photo. We then generated an avatar for the user based on the analysis results. Some of the parameters that the generated avatar was based on included; eye, mouth, nose position and size, gender, beard, glasses. The avatar was created as an SVG, the facial features were nested SVGs that were scaled and positioned based on the selfie. The user could then adjust their features/hairstyle through the UI. 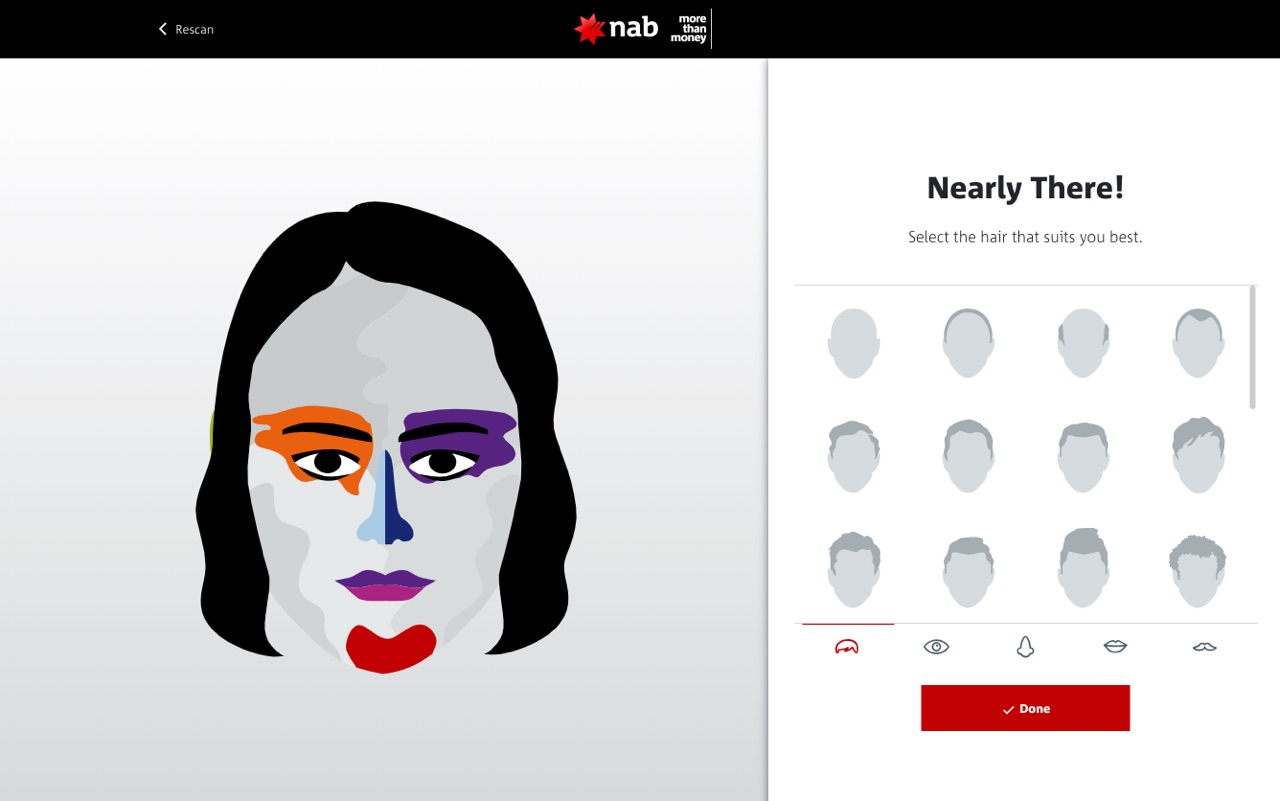 During this stage the user is prompted to speak to the app through a series of questions. The speech is analysed in real-time using the native SpeechRecognition API for browsers that support it, and the IBM Watson service is used in other browsers. As the user is speaking the avatar is filled in with patterns that relate to the topics they mention. Each avatar consists of a certain number of clipping masks that will get filled with different patterns. Resulting in a unique personalised avatar based on what the user wants in life.

The avatar generation was my main area of focus. I created a standalone ES6 library for this feature. Since it was quite a unique feature we needed to prototype this early on to understand what was feasible. So building it as a library allowed us to work on it independently of the rest of the app and integrate it when ready. One of the main concerns we initially had with the avatar was performance, we were not sure how it would perform when filled with patterns that would be animating in real-time. After an initial unsuccessful attempt and some more research, I came across the Pattern element available in the SVG spec. Using this feature, which is supported in all browser we support (IE11+), greatly improved performance.

I used the Greensock MorphSVG plugin to create the icon morphing animation. When the user spoke this was analysed and then triggered a call to the avatar library that would contain metrics on how the current pattern should be morphed, including: diameter, spacing, angle, color, background color and icon type. I was very happy with the end result, silky smooth morphing animations even with a full face of patterns!

Once the avatar is filled with patterns the user can move onto the next step, which displays a summary of what we detected was important to them. This is also customisable.

They can then share/save images of their avatar and statement. For this we converted the SVG image to PNG using browser APIs. However IE11 didn’t provide support for this, so in order to provide support for IE, I created a micro-service that did the image generation server side. This involved using puppeteer to launch an instance of Chrome to render the SVG to canvas, then convert it to a base-64 PNG image. And all of this was accomplished in a Lambda function, which I thought was very cool!

It may have been a struggle at times, especially with quite a tight deadline. But in the end we had combined multiple cutting edge technologies together to produce a unique web experience! Not only was our team very proud of it, but it was also very well received by the client.